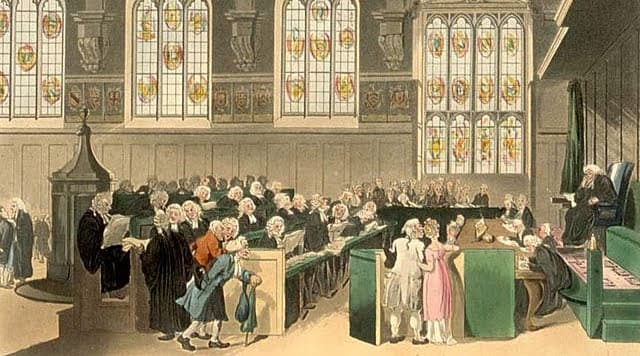 Jewish law prescribes two different methods for courts to resolve disputes: din (strict judgement according to the letter of the law) and pesharah (court-imposed settlement).1 Under din, courts are instructed to decide cases by applying the substantive halakhot of Jewish civil law to the dispute at hand. Under pesharah, courts are instructed to resolve disputes by imposing a reasonable and fair settlement on the parties.2

What considerations would the dayanim bring to bear on a case being decided according to pesharah? Rishonim note that there are different forms of pesharah.3 One form of pesharah—sometimes referred to as pesharah kerovah la-din—tracks the equities as determined by the halakhah’s conception of who acted wrongly and how egregious their action was. Pesharah kerovah la-din differs from pure din in that it lowers the formal standards of evidence; it allows a beit din to issue an award based on moral wrongdoings (chiyuvim bidei shamayim and aveirot) that would otherwise not be justiciable or enforced in court; and it licenses dayanim to base their decision on authoritative halakhic opinions that are not accepted by a consensus of all poskim. On this view, the considerations in pesharah are mostly tethered to the equities determined by the core principles of Choshen Mishpat.4

A different kind of pesharah takes the form of pure compromise. Pure compromise pesharah is motivated by considerations of civil harmony (shalom) and looks to impose a settlement that will extinguish the dispute (le-hashkit ha-merivah) in a manner that will maximize the preferences and minimize the grievances of each party, even if the settlement significantly diverges from how the case would have been decided on its halakhic merits.5 Some commentators suggest that under this form of pesharah the dayanim are supposed to put themselves into the mindset of the parties and figure out the terms at which each party would be willing to settle.6

The Talmud records two opposing opinions whether courts should prefer pesharah over din or din over pesharah.7 One view maintains that it is prohibited (asur) for courts to do pesharah.8 This is because the courts are not permitted to deprive a litigant of what he or she is entitled to under the substantive provisions of halakhah. Depriving a litigant of their halakhic due constitutes a form of theft (gezel).9

The other view holds that courts are under an obligation (mitzvah) to do pesharah rather than din.10 The Rambam, Tur and Shulchan Arukh all rule that pesharah is preferable over din.11 And they each make a point of praising a court that frequently settles cases according to pesharah.12 Why should that be? Why should Jewish law be partial to resolving disputes according to court-imposed settlement rather than the letter of the law?

Commentators offer several reasons why Jewish law favors pesharah over din. First, a court-imposed settlement has the potential to resolve the dispute in a manner that leaves both parties satisfied with the outcome, whereas din would usually leave one party dissatisfied.13 For similar reasons, pesharah can lead to a more stable resolution of the dispute because both parties will more likely comply with a pesak that has benefits for each of them, as opposed to a ruling that holds exclusively in favor of one side. These reasons underscore a beit din’s role in maintaining civil order through resolving conflicts and helping parties move on from their disputes. Chazal praise pesharah as a form of justice that incorporates reconciliation and enduring peace (“mishpat she-yeish bo shalom”).14

A second reason in favor of pesharah is that it allows the beit din to utilize a greater range of remedies than would be available under din.15 In certain areas of Jewish law, the remedies prescribed can be prohibitively limiting. For example, the standard for proximate cause in Jewish tort law (gerama be-nezikin patur) severely limits a plaintiff’s ability to recover damages in a tort action.16 Likewise, the pure principles of Jewish law do not allow a plaintiff to recover damages for libel or defamation suits.17 These limitations restrict a beit din’s ability to award damages as a matter of din, despite the fact that the defendant has acted wrongfully and even has a halakhic moral duty (chiyuv bidei shamayim) to compensate the plaintiff. Pesharah allows the beit din to consider such moral wrongdoings (chiyuvim bidei shamayim and aveirot) in its decision and to award damages accordingly.18

A third reason favoring pesharah over din is that pesharah can relax some of the procedural rules that govern a din torah. For example, under din, the plaintiff generally bears a heavy burden of proof. In some cases that burden requires a plaintiff to establish his claim through the testimony of two valid witnesses.19 Under pesharah, however, the dayanim can issue an award without valid testimony, based on strong circumstantial evidence.20

The common denominator to the last two reasons is that pesharah allows the beit din to consider wrongdoings that would otherwise not be justiciable or enforceable in beit din (either because of chiyuv bidei shamayim or because of the difficult burden of proof). While this benefits the plaintiff in allowing him or her to be compensated for a greater range of wrongdoings and at a lower standard of proof, it also benefits the defendant because the final award constitutes a comprehensive settlement of all matters pertaining the suit (including grievances and moral claims).

There is, however, one important exception where a beit din can impose a settlement without having been authorized by the litigants. When the substantive dinim of Jewish civil law are indeterminate with respect to the case at bar—when there is no clear halakhic resolution to the dispute—a beit din is empowered to resolve the case according to pesharah, even without the authorization of the litigants.23 This is because one of the roles of a beit din is to preserve civil order by resolving conflicts. It therefore has a duty to settle a case even when the substantive dinim of Choshen Mishpat provide no resolution. Poskim explain that in such instances din and pesharah converge, since din itself mandates that the court resolve the case according to pesharah when din is otherwise indeterminate.24 The din, in such a dispute, is court-imposed settlement.

How do we reconcile the fact that Jewish law prefers pesharah over din with the fact that, barring permission from the parties, a beit din generally does not have authority to do pesharah? Philosophically, the answer is that litigants have a right to din and are entitled to insist on it, yet halakhah still encourages them to waive their right in favor pesharah.25

Practically, the answer is that while a beit din generally cannot impose pesharah on the parties without the litigants’ consent, it has a duty to encourage them to accept pesharah. This has two procedural applications. First, when litigants appear before a court to do din, the court has a duty to offer the parties the option of choosing pesharah.26 According to some poskim, the court should even attempt to persuade the parties of pesharah’s virtues.27

Second, even when a court is accepted exclusively for din, the dayanim could propose a specific settlement to the parties and attempt to convince them of its benefits.28 Here the court is merely proposing a settlement, not imposing it on the litigants. Ultimately, the litigants have full discretion to decide whether they want to accept it.

In conclusion, Jewish law favors pesharah over din. This is because pesharah provides for a more comprehensive resolution to the dispute. It allows the dayanim to consider wrongdoings that would otherwise not be justiciable or enforceable in court, and it allows the parties to move forward in a manner that has benefits for both sides. Although a beit din generally cannot impose a pesharah without authorization from the parties, it is supposed to offer the parties the option of pursuing pesharah. A beit din can even propose a concrete settlement in the course of a din torah, though ultimately it is up to the parties to decide whether they want to accept the beit din’s proposal. One exception is when din is indeterminate, in which case a beit din is empowered to impose a settlement on the litigants even without their prior authorization.

The Beth Din of America’s standard arbitration agreement provides that the dayanim “may resolve this controversy in accordance with Jewish law (din) or through court ordered settlement in accordance with Jewish law (peshara kerovah la-din).” The Beth Din’s Rules and Procedures, Section 3(a), also provide that in the absence of an agreement by the parties, arbitration at the Beth Din will take the form of pesharah kerovah la-din.

Although the Beth Din of America encourages parties to have their disputes heard according to pesharah kerovah la-din, the Beth Din’s Rules and Procedures, Section 3(b), provide for the Beth Din to hear cases either according to pure din or pure pesharah if that is the mandate of the parties.30